Statistics Iceland is publishing data for the first time on taxable wages by economic activity. The statistical data consists of total sums of taxable wages, which employees earn from their employment on a monthly basis. Also included in the published data iare the number of employers that pay wages and employees that receive wages. Own-account workers, that who receive payments through their own social identity and pay themselves calculated remuneration, are excluded from the data. Employers are classified by economic activity based on the primary economic activity of the enterprise using the Statistics Iceland’s Business Registry.

The statistical results are preliminary and span the term from January 2008 to May 2020. Users should note that some enterprises may have yet to transfer their specification of wages to The Icelandic Revenue and Customs for April and May of 2020.

Statistics Iceland publishes annually information about taxable wages in the Icelandic labour market in the publication of Structural business (business sector/exchange economy) and in Production approach of National accounts on Compensation of employees by kind of activity (entire economy). However, timely indications on wages paid by enterprises, institutions and municipalities haven’t been published until now, with the new publication of Taxable wages (total sums).

The purpose of this publication is to give an indication on wages paid in the Icelandic labour market, in a timely manner, by economic activity. The Icelandic society has gone through tremendous changes during the last few months, particularly due to the Covid-19 pandemic. As a result, the need for timely information on the development of the economic activity/labour market in Iceland has increased significantly. Statistics Iceland is planning on making this timely indicator of taxable wages into a regular publication, therefore all feedback and suggestions by users are greatly appreciated. For feedback and suggestions please contact wages@statice.is

The total sum of taxable wages in Iceland decreased slightly during the first part of the year 2020, 2.8% between January and May 2020 compared to the same period 2019. The total sum decreased by 1.8% between February and March 2020 and by 2.7% between March and April the same year but increased by 7.7% between April and May 2020. The increase is in line with the seasonality of past years, mainly due to payments by employers in accordance to collective agreements of a fixed vacation lump-sum in May. There are other observable distinct seasonal patterns in the dataset, which goes back to January 2008. For example, in the end of each year when yearly premiums of December- and personal supplement are paid. Then total wages increase due to the premiums in the payment month and decrease again the following month. 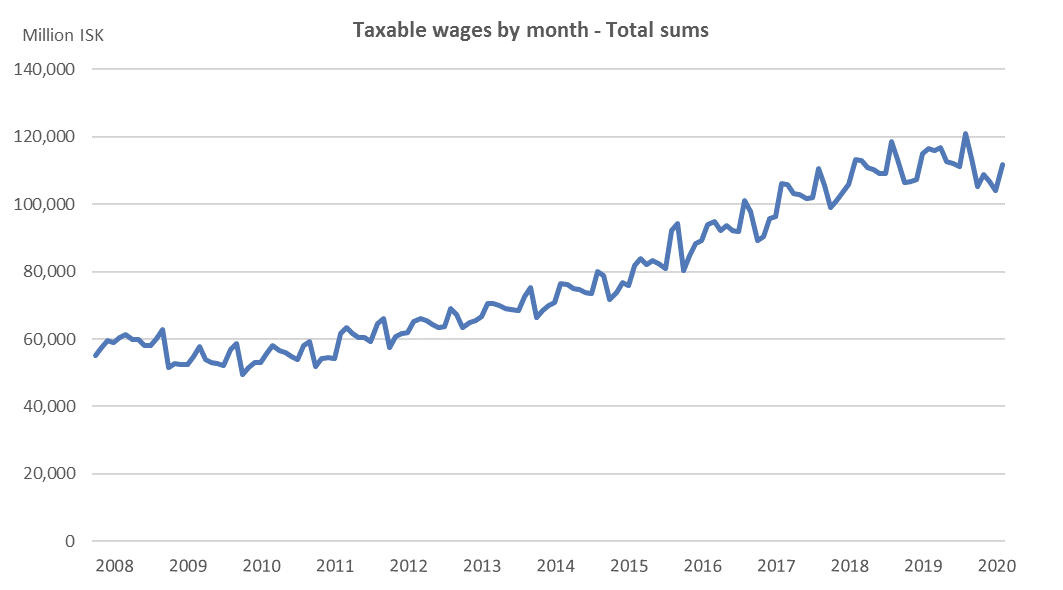 Increase in the total sum of wages is often also noticeable when pay raises are stipulated in collective agreements. That was, however, not the case in April of 2020 even though a large majority of employees in Iceland had a set pay raise according to their collective agreements. That discrepancy can be traced to the unprecedented times of the Covid-19 pandemic and the subsequent actions of the Icelandic government. Employers could, for example, apply for partial unemployment benefits adjacent to decreasing their employers’ employment ratio from the end of March 2020. Subsequently, that means a decrease in paid wages for those who received the partial benefits. On the other hand, subsidies from the government like for payments in lieu of notice to employees were not significant in the results. Then employers receive their wage payments but employers can apply for reimbursement from public sources.

The effect of the current economic circumstances on taxable wages varies by economic activity. For example when looking at Tourism industries1 there is a quite a noticeable effect, as can be observed in the graph below, while the effects on Fisheries2 is distinctly less. 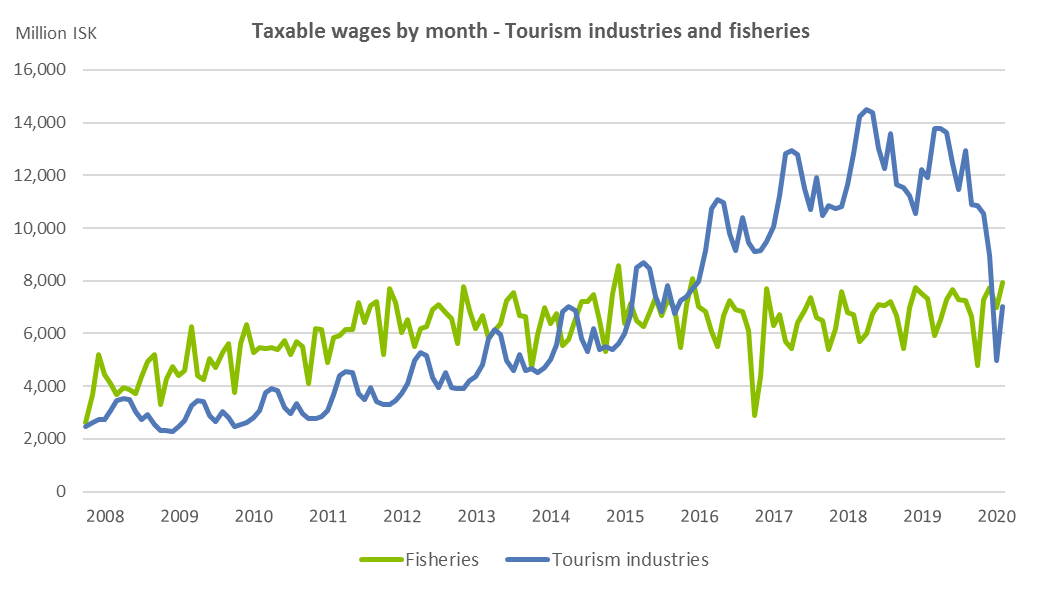 2 Fisheries is composed of the division 03 Fishing and aquaculture and 10.2 Processing and preserving of fish, crustaceans and molluscs in the ÍSAT2008 classification system.

The data on taxable wages (total sums) is preliminary and based on the Pay as your Earn data in ISK on current price levels for each month. Users should note that the data may be subject to minimal changes due to possible late transfers of some enterprises’ specification of wages to The Icelandic Revenue and Customs. Those changes usually result in a slight increase in the total sum of wages by months, if and once they are turned in. The data can also change slightly if an enterprise changes its’ primary economic activity, and needs to be reclassified in the dataset. Those changes can be retroactive.

The data is based on statements from employers to The Icelandic Revenue and Customs for taxes and duties. All those who are considered an employer according to the Act on the Withholding of Public Levies at Source must turn in specification of wages to The Icelandic Revenue and Customs for all individuals who receive a taxable payment. There is no distinction made between wages and other payments, such as benefits, in the fundamental data, but Statistics Iceland differentiates between those payments in its’ data processing methods. Own-account workers, who receive payments on their own social identity and pay themselves calculated remuneration, are excluded from the data.

Taxable wages (total sums) include the greatest part of income wages for employment, which is paid on a monthly basis to employees. The wages include any kind of remuneration/compensation for employment, such as wages, vehicle, travel and housing subsidies and other subsidies, per-diem allowance, lump sum payments, vacation benefits and other payments that are legally documented according to the pertinent regulation. Taxable wages do not include calculated remuneration, parental leave, unemployment benefits and other benefits, or capital income.

Numer of employees receiving taxable wages is a tally of all those who receive taxable wages from an employer. An individual that receives wages can be counted more than once if he or she receives wages from more than one employer. There is no distinction made based on whether employees are employed full-time or part-time. There is no set minimum payment for wages in the data, so which means that in some cases the payment an employee receives can be substantially minimal.