AEA from Iceland by months- ex

AEA from Iceland by months

Statistics Iceland now publishes data for emission of greenhouse gasses from the Icelandic economy with monthly time resolution. The values are that of the heating equivalences (CO2 equivalences), which weighs the warming effect of all emitted greenhouse gasses. The Icelandic economy is divided into 64 economic sectors according to the registered economic activity of the business, with three additional sectors reserved for the activities of Icelandic households (NACE*64). This division follows the classification of economic activities used in national accounts and business statistics. The emissions are accounted according to the residence principle, meaning that all emissions by Icelandic businesses and residents are accounted, regardless of where they occur, but emissions due to non-residents and non-resident businesses are excluded.

The values here are based on the Air Emission Account (AEA), which Statistics Iceland publishes annually to Eurostat. The official AEA account are based, in part, on the National Inventory Report, which the Environmental Agency of Iceland submits annually to the UN Framework of Climate Change, and on the Energy Account, which the Icelandic Energy Authority submits annually to the International Energy Authority (IEA). The last two accounts have, however, limitations in timeliness since they are based on extensive surveys from national operators. Statistics Iceland can, however, extend its time series beyond the official accounts by using financial statistics, import/export statistics, production statistics and other detailed datasets on financial and material flow that are used within Statistics Iceland. Most of the datasets have month-to-month timeliness which is here used to resolve emissions on the same timescale.

The purpose of extending the time series of the AEA to current date, and improve the time resolution of the account is to inform the discussion society about environmental issues at the same time as the economy deals with, and recovers from the COVID-19 crisis.

Emissions of carbon dioxide equivalences (CO2 eq) from the Icelandic economy in the second quarter of 2020 was 21.3% lower than the emission for the same quarter in 2019, or 1,328 kilotonnes in comparison with 1,688 kilotonnes. Restrictions in connection with the first wave of Covid-19 occured in the second quarter of 2020 and the effects were widespread throughout the economy. 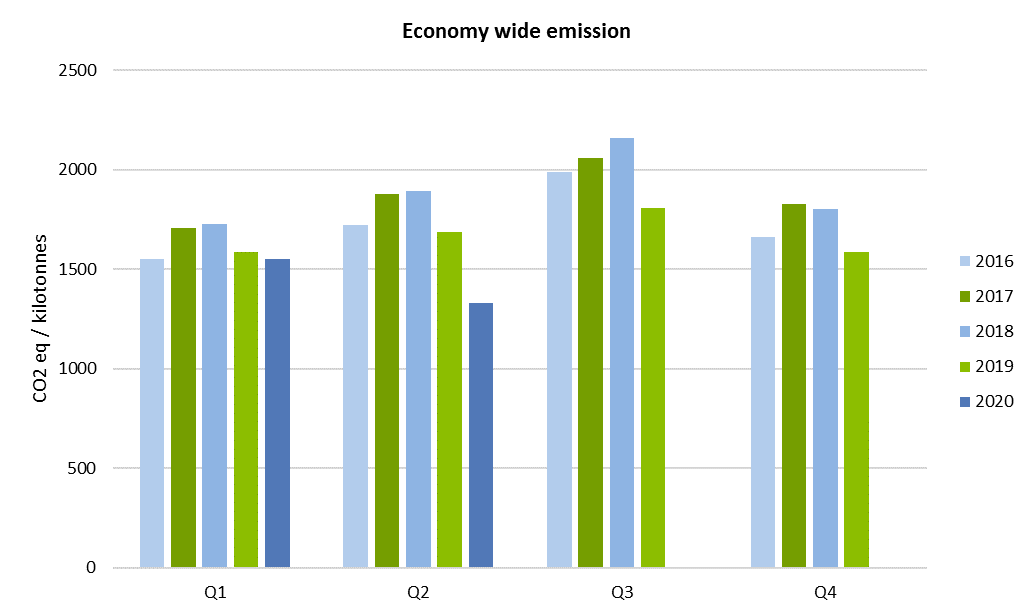 The greatest reduction of emissions was in the air travel sector, which was 57% lower in the second quarter of 2020 compared with the same quarter the previous year since border restrictions severely affected tourism here like in other countries. 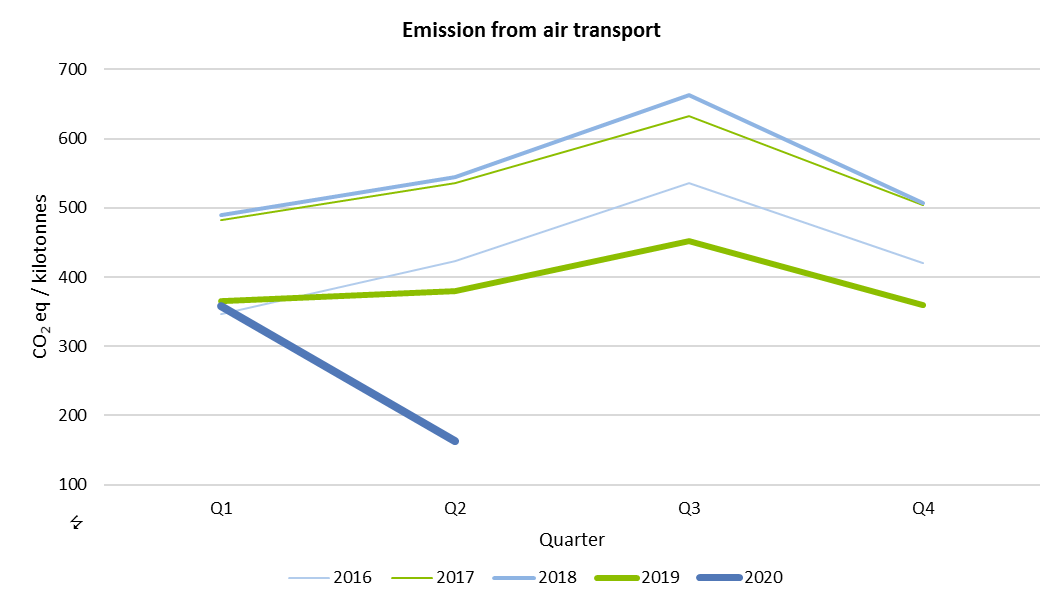 Traffic of personal vehicles was greatly reduced during the first wave of proximity restrictions in April and subsequently the emissions due to operation of household vehicles. The emissions were reduced by 34.1% in April 2020 compared with the same month of the prior year. Emissions in June 2020 were on par with the same month of the previous year and emissions in July were somewhat greater than in July 2019. 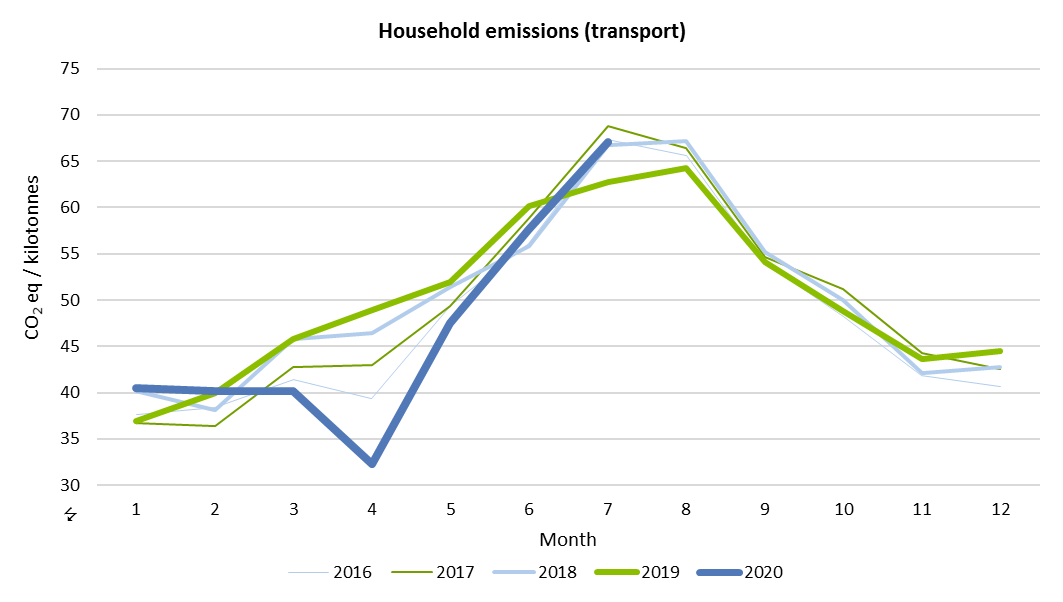 The effects of Covid-19 restritions are therefore only visible during the most strict travel limitations, but reduced restrictions have little effect on emissions compared with previous years.

Emissions due to road transport are estimated using sales records from gas stations owner/operator records of vehicles in February and August for each year. It is assumed that vehicles registered to private individuals are in operation of households and not businesses. Estimations of emissions from airline operation uses purchases of icelandic airline operators of fuel and make/model of the flight fleet. In addition the number of takeoffs and landings, number of passengers and number of employees is used.

The data is made available on the website of Statistics Iceland at the site of experimental statistics. Values will be updated regularly as well as the methodology of estimation. The exact values are therefore subject to change.

Assumptions and foundation in the model

Known errors in the model

Businesses report VAT, exports and production after the emissions of greenhouse gasses have occurred. Similarly imports occur prior to emissions. An attempt was made to correct for this type of shift in the data, especially when import or export happen irregularly. No time-shift correction was made where month-to-month flow of material was only slowly varying. This could, however, cause an error in the reported monthly values, but should have less effect when looking at quarterly or annual values.

In some cases the registered financial activity of a business is different from the activity that causes the emission. Businesses are also known to change activities between quarters or change its identification number. Such changes cause uncertainties in the production summary, which affects emission values.

Businesses can also invest in emission mitigating equipment, re-invest in low-emission fleet, or install electric boilers for oil consuming ones. Such changes are not automatically reported to Statistics Iceland, but these changes should be correctly reported in the NIR and Energy Accounts. The effect of green technology will therefore not be reflected in the data here until after they have appeared in the NIR report (lag time of up to two years).

The NIR and the Energy Account can undergo a review, be corrected or new calculation method introduced. Changes in these primary resources has a significant effect on the numbers reported here.

Use of these experimental statistics is free. Please quote the source.
For further information please contact+354 528 1278. Netfang: Thorsteinn.Adalsteinsson@statice.is