In the autumn of 2011 there were 2,405 new entrants in three year Bachelor degree programmes in universities in Iceland. Three years later, 33.3% had graduated on time. An additional 0.7% had graduated from other tertiary programmes, such as two year diploma programmes. A total of 23.7% of those new entrants had dropped out of school or taken a temporary leave from study, while 42.4% were still in education without having graduated. A total of 35.9% of female and 31.3% of male entrants had graduated from tertiary programmes in three years. Only new entrants in full-time education who are Icelandic citizens are included in the data.

As a comparison, the graduation rate was a little higher for new entrants in three year Bachelor programmes in the autumn of 2004. A total of 34.7% of those entrants had completed a Bachelor degree and 2.4% had graduated from another tertiary programme three years after entering.

In comparison, 67.0% of new entrants in the autumn of 2004 had completed the Bachelor degree six years after entering, while 2.6% had completed another tertiary programme.

Four out of five entrants are still in education one year after entry
A total of 18.3% of new entrants in the autumn of 2011 had dropped out in the first year of study, but 81.3% continued studying for a Bachelor degree and 0.4% had transferred to another tertiary programme. 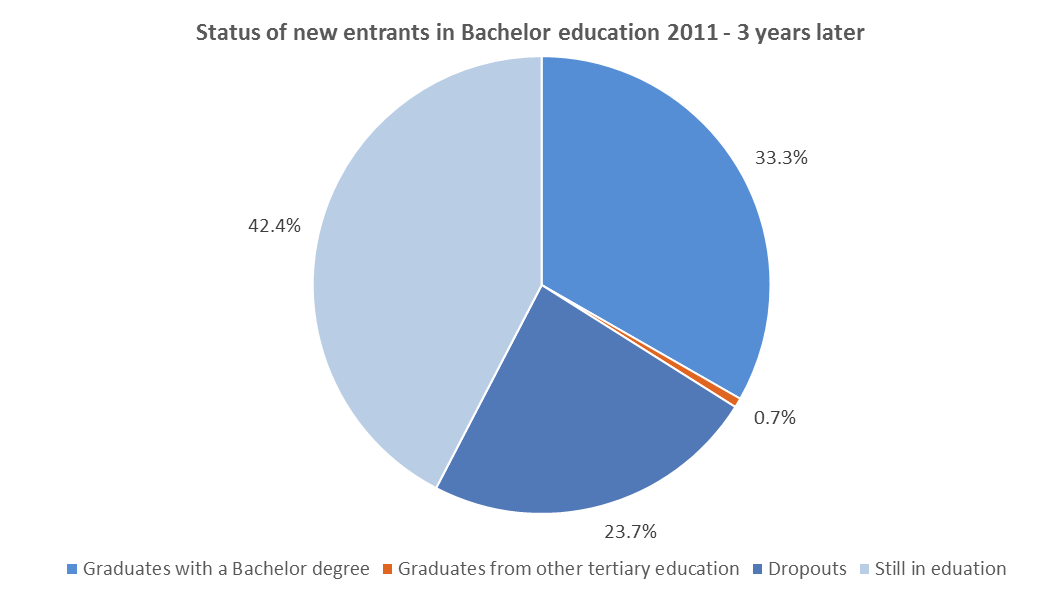 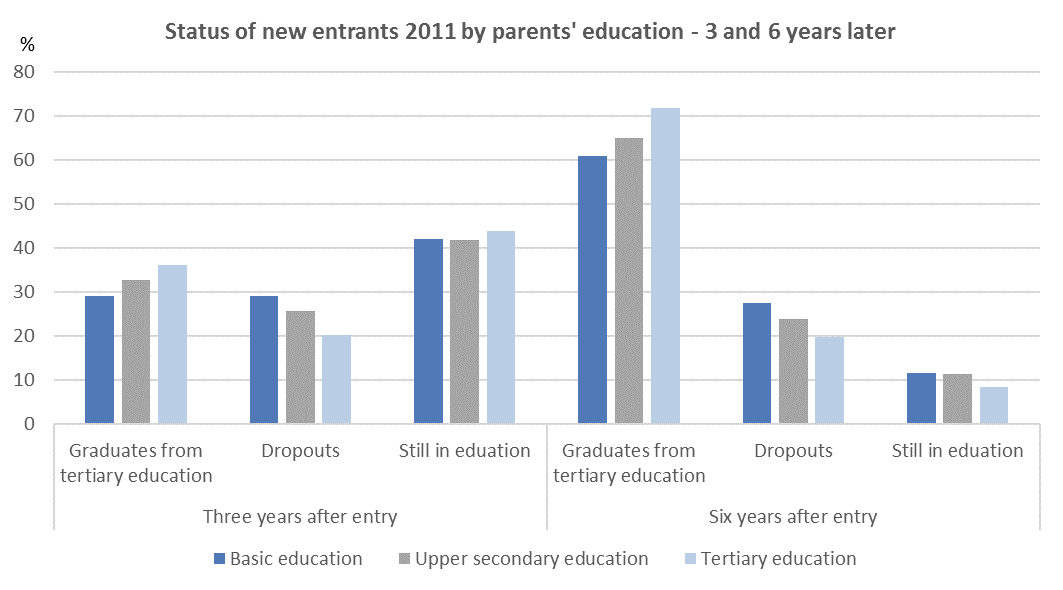 What is dropout?
Dropout from education can be defined in a number of ways. The method used for these data is to follow up on new entrants in full-time study in the autumn, so-called cohort rate.

About the data
New entrants in these data are students who were registered in three year Bachelor degree programmes in the autumn for the first time, since the start of the Statistics Iceland Student register in 1975. These data include all Icelandic citizens in full-time education in the first year of study. Full-time is defined as being registered in 75% or more of a full-time study load. Graduates are those who have graduated from the tertiary level three years and six years after entering. Students still in education are those students who are studying in tertiary education in Iceland in the autumn, who have not graduated. Information on parents’ education comes from the Statistical Educational Attainment Register and the data refer to the parent with higher educational attainment. These data as based on OECD definitions on completion rate and dropout. In September the OECD will publish comparable data for other OECD countries. The methodology used for these data is different from the methodology used in the past to compute the completion rate at the tertiary level, which has been published on the Statistics Iceland’s website every two years.

Go back
Use of this press release is free. Please quote the source.
For further information please contact menntamal@statice.is, tel. +354 528 1000