There has been a significant growth in aquaculture in Iceland and fish farming activities have quadrupled in the last decade. In 2018, the production was 19 thousand tonnes, which is 1.8 thousand tonnes less than in 2017. Turnover in aquaculture was just above 19 billion ISK in 2017 and has been increasing every year. There have been many investments in fish farming in last years and the net worth of the aquaculture businesses was 51% in 2017. The main species are salmon and arctic char. According to Eurostat, Iceland ranks fourth as main salmon producers in Europe and Iceland has the highest production of arctic char. 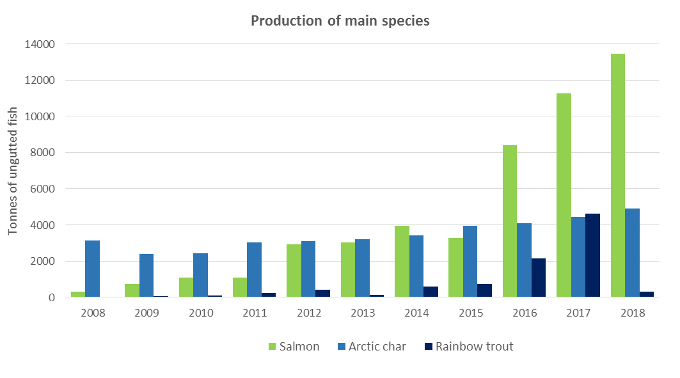 The number of employed persons in aquaculture was 435 in 2017 and the overall revenue in the field was 19.3 billion ISK. The net worth of aquaculture companies has increased significantly in the last few years.

Export and comparison with other countries
The export value of farmed fish has increased sevenfold in the last 10 years, from 2 billion ISK in 2008 to 13.7 billion ISK in 2017. According to preliminary export data for 2018, the export value may have reduced by 0.7 billion ISK from 2017. In 2018, 95% of salmon was exported whole, 4% as fillets and the rest as live fish and juvenile fish. Of trout, arctic char and rainbow trout, 45% was exported whole and 55% as fillets.

In comparison with other European countries, the Icelandic aquaculture production was small in 2016. Salmon production is significantly more in France, Ireland, Norway and the UK, while Iceland is the biggest producer of arctic char and Sweden is the next in line.

Go back
Use of this press release is free. Please quote the source.
For further information please contact fiskitolur@statice.is, tel. +354 528 1260