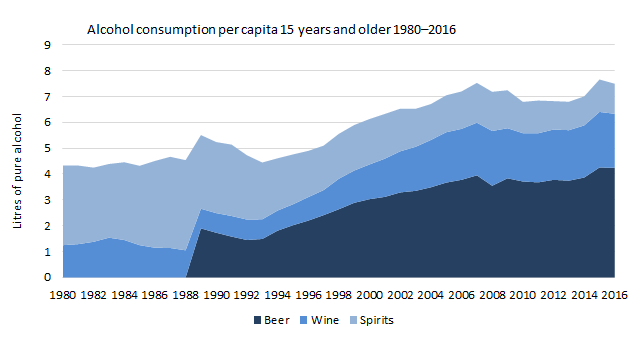 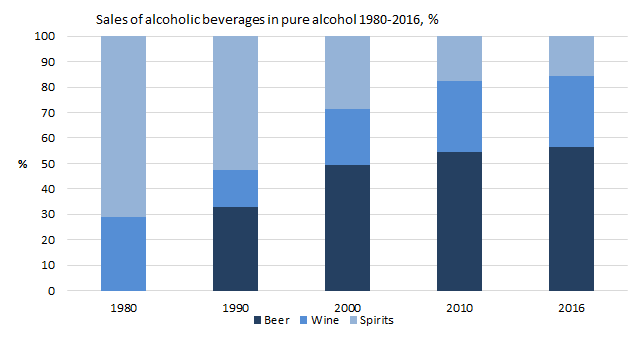 A comparison with the Nordic countries
The consumption of alcoholic beverages measured as pure alcohol has fallen in Denmark, Faroe Islands and Greenland as well as somewhat in Finland since the year 2000. At the same time it has increased in Åland, Iceland, Norway and Sweden as illustrated in figure 3 which shows the number of litres of pure alcohol consumed per capita 15 years and older in 2000 and 2016. The fall is biggest in Greenland but the increase biggest in Iceland in this period.

Data sources and methods
After a break for some years, Statistics Iceland now resumes the publication of statistics on the consumption of alcoholic beverages following changes that have been made to data sources and statistical methods. Alcohol consumption is presently calculated as the volume of sold litres of pure alcohol based on information from the Ministry of Finance and Economic Affairs on the taxation of import and domestic production of alcoholic beverages each year as well as information on sales of alcoholic beverages from the State Alcohol and Tobacco Company of Iceland (ÁTVR). Figures are published on the total consumption in litres of pure alcohol for the years 2008–2016 broken down by beer, wine and spirits.

Statistics on alcohol consumption have undergone various changes through the years but are based on sales data. Results for the years 1995–2007 cover the sales of The State Alcohol and Tobacco Company of Iceland and the sales of licence holders according to their reports to Statistics Iceland. This was followed by a pause in publishing data on alcohol consumption by Statistics Iceland until now.

The figures on quantity do not take into account alcohol imported by ship and aircraft crews and tourists entering the country, alcohol exported by the ÁTVR and others or alcohol sold to the Duty Free Store at Keflavík Airport.

Go back
Use of this press release is free. Please quote the source.
For further information please contact Sigridur.Vilhjalmsdottir@statice.is, tel. +354 528 1054