Please note that this press release has been revised from the original version due to data error. Statistics on Statistics Iceland’s website have been corrected accordingly.

The advertisement revenue of the media in Iceland declined between the years 2018 and 2019 by 17% in real prices while at same time revenue from users increased by 6%. Total media revenue declined by 4% between years. The total revenue of the media in 2019 was 25,781 million ISK. Revenue derived from users was 15,009 million ISK and revenue from advertisements and sponsoring was 10,772 million ISK.

The share of the public broadcaster, The Icelandic National Broadcasting Service, of the total media revenue increased slightly between years, or from 24 to 25% simultaneously as its share in advertisement revenue of broadcasting (radio and television) declined slightly. The five largest media operators retain some 86% of the total media revenue. Up to four of every ten ISK spent on advertisements in the media go to foreign websites and media.

In the wake of the financial collapse in the fall of 2008 there was an appreciable slump in revenue of the media (i.e. newspapers, magazines and other periodicals, radio and television and web media). Between the years 2007 and 2010 the revenue of the media declined nearly 30%, measured in fixed 2019 prices. After some increase in the years 2015-2017 the media revenue has fallen some 11%. The decline was more serious in revenue drawn from advertisements than in users’ fees and revenue related to direct sale to customers. Revenue derived from advertisements have fallen by 25% since 2016 and by 41% since its peak in 2007, calculated in real prices. On the other hand, revenue from users increased by 6% in the year 2019, almost on a pair with the year 2008 (see figure 1). 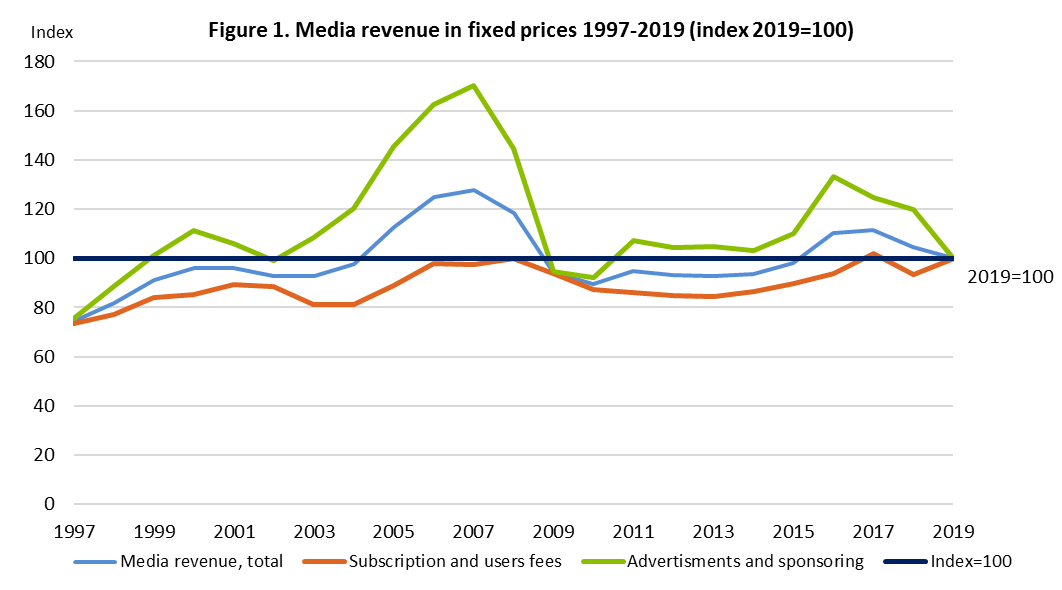 The fall in the revenue of the media is manifested differently between different kinds of media. Newspapers and magazines have suffered more severe fall in revenue than other media, which can be explained by changes in media consumption. The revenue of newspapers (i.e. dailies and weeklies) has fallen by 59% since it was highest in 2006. The fall in revenue of newspapers between the years 2018 and 2019 was 20%. Revenue of magazines and other periodicals fell by 12% between 2018 and 2019 and web media by 7%. At same time radio and television revenue increased by 1% and 4%, respectively (see table 1).

New patterns in media consumption are partly captured in changed share of different media in the media revenue over time as shown in table 2. In 2019, roughly half of total media revenue was picked up by television compared with 39% in 1997. Radio’s share changed only slightly between the years 1997 and 2019 or from 13 to 14%. The share of magazines and other periodicals has slightly declined, or from 10% when at the highest in the years 2001 and 2002, down to 6% in 2019. The web media retained 7% market share in 2019. Newspapers have fared worst in this comparison. In 1997, newspapers retained 40% share compared to only 21% in 2019. 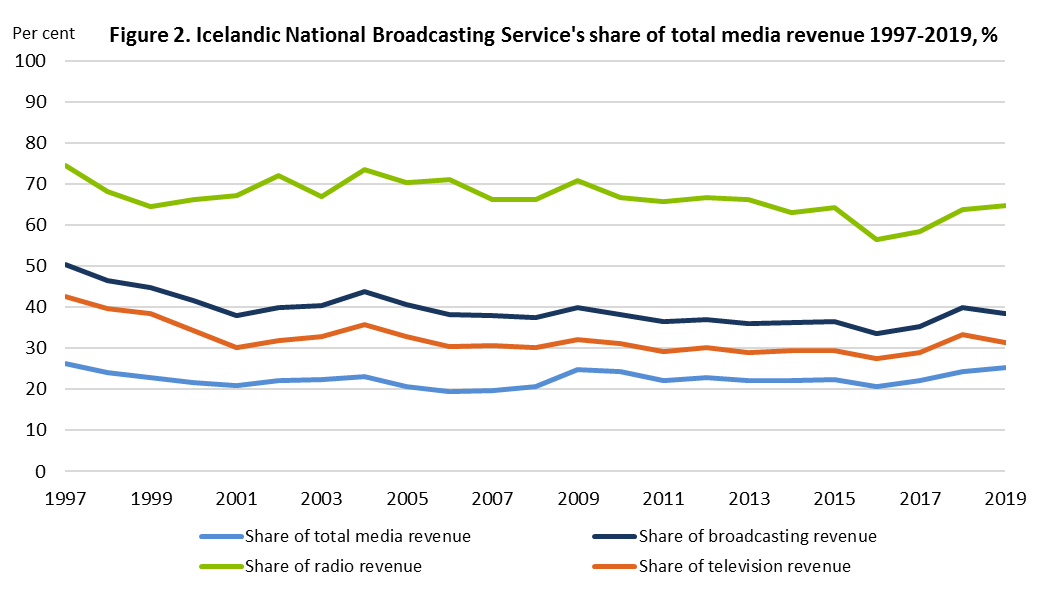 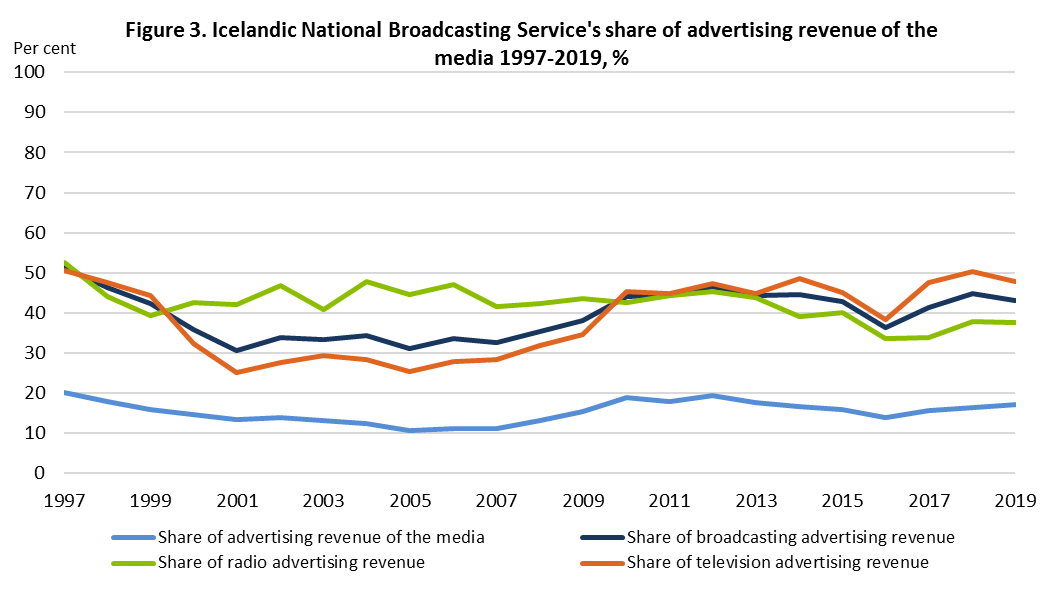 In 2019, five media companies and operators (including the public broadcaster) retained 86% share of the total market. The share of the largest five was 93% in subscription and user fees and 76% of the advertising revenue of the media (see table 3).

If the public service broadcaster is exempted, the five largest private media companies retained 83% of the total revenue of the private media, 92% of subscriptions and user fees and 74% of the advertising revenue.

Reason for the slump in advertising revenue of the media in later years is largely attributable to payments for advertising services by foreign web sites and media. Various difficulties are associated with gauging the exact amount of these payments. In 2019, 7,826 million ISK were payed to foreign companies for advertising services, market research and surveys included, compared with 11,528 million ISK payments for advertising display in Icelandic media (including cinemas and outdoor advertisements). Accordingly, 40% of the total payments were paid to non-domestic companies (see table 4). However, it must be kept in mind that considerable part of the payments to abroad is due to advertising aimed at consumers abroad, especially in connection with tourism. Hence, only a part of the revenue stream to abroad is to be considered as loss of advertising revenue of the local media. No information, whatsoever, is available in these matters.

It can be assumed that a significant part of advertising payments to non-domestic media is spent on advertising display on Facebook and Google (including its subsidiary YouTube). Credit card transaction information show that nine of every ten ISK spent were payed to these two parties. Comparable information for total payments for trade in services for advertising, market research and surveys is not available.

About the data
Information about revenue of the Icelandic media are derived from information from the media companies to the Icelandic Media Commission since 2011 (before to Statistics Iceland) and annual accounts. In the instances when information is lacking from media operators revenues are estimated from VAT tax reports and other available information. Media revenue is here defined as revenue from users (subscription fees, single copy sales and pay-per view, broadcasting fee levied upon all eligible individuals and companies) and advertisements and sponsoring. The data does not include foreign media. Information about individual private media is not provided due to rules of confidentiality.