Visits to cinemas decreased by 180,000 between the years 2018 and 2019. Admissions to showings of full-length feature films were 1,246,000 compared with 1,427,000 in the previous year. This equals a drop of 13%. Cinema visitors have not been fewer since comprehensive data has been available (see figure). 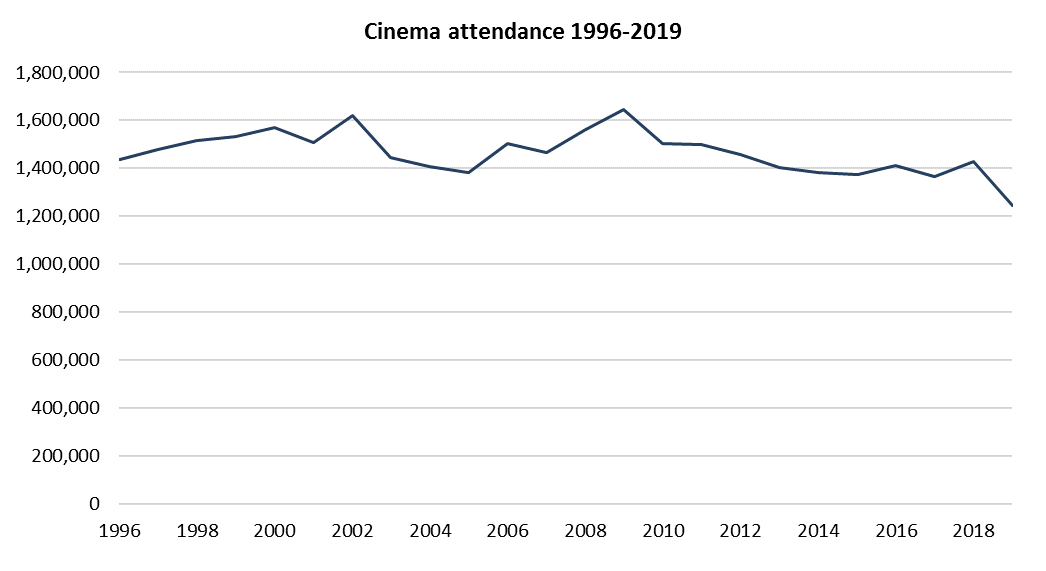 Film admissions in 2019 equal roughly three visits per capita. Admissions per capita were by far the highest in the Capital region or 4.6, compared with 1.4 visits outside the region.

The Gross Box Office revenue in 2019 totalled 1,553 ISK million compared with 1,772 ISK million in 2018. The share of domestic films in 2019 of GBO was 4% and 3.5% in share of the total admissions. US produced films had the far highest share of films from individual countries, or 84% of GBO and admissions.

In 2019, 180 full-length features were released, of which 94 were US productions, eight domestic productions, 12 Nordic, 18 British, 33 other European productions and 15 productions from elsewhere. In the year 2109, 15 cinemas were operated in the country with 40 halls in nine municipalities. Seating capacity was 6,551 seats and the average number of showings per week were roughly 1,000.

Information about films and cinemas stem from an annual inquiry among exhibitors and the database of film and television rights-holders in Iceland on theatrical film showings from film distributors.