The general government total expenditure on social protection increased considerably during the last quarter century or from 5.7% of GDP in the beginning of the eighties to 8.9% in 2008, which corresponds to 132 billion ISK in that year. The social protection expenditure has more than tripled in volume (220% increase) over the period compared with the price index of government final consumption and more than doubled (129% increase) when measured per capita. 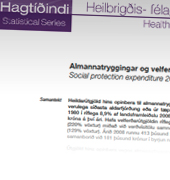